This is a fun task to play with Python’s turtle graphics. Below is Python code to draw a race track. See if you can write some Python code between “# ninja start” and “# ninja end” which will make the turtle race all the way around the track without bumping into the side of the track. I have provided the first three lines which gets the turtle half way around the first turn. 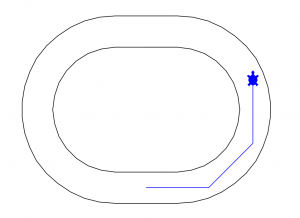 The python commands you will need are

You can change the numbers to whatever values you need to get the turtle all the way around the track.

You can run this python code on your computer or on website such as https://hourofpython.trinket.io .

Here is the python code to run and edit